Live & direct from Minneapolis, from our special correspondant the webcam.

Thanks technology ! On a regular basis, we’ll let the webcam catch what’s happen here at the moment, in the main workroom. Movements from everyone will altern on this very website with blog notes that will allow everybody to check how the emulation is already rules here !

Ok, let’s be honest : we’re running out of time here as there’s only one chifoumist at the moment, and well, between some workshops to prepare, the residency to adjust, and all the many, many rendez-vous that are making this very huge timetable, let’s say it clearly : this will be something, guys, that we hope will be as great as we feel it at the moment.
The ChiFouMi gang will be ready and in full effect in a few days and the news will start to invades this website (as for our facebook and twitter pages…), and before that, a few news things that comes up these last hours, after a long, slow roasting : 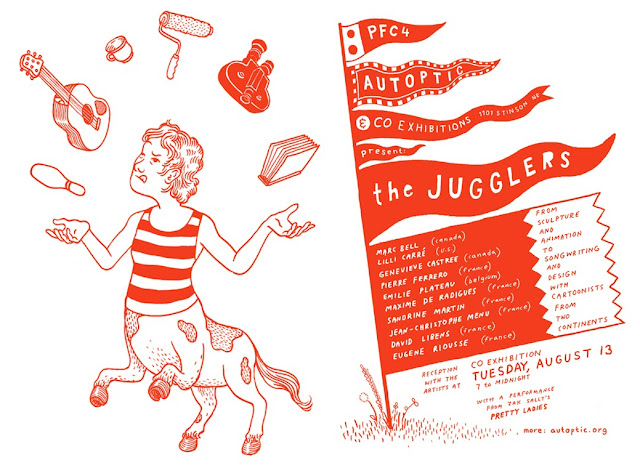 Our man Anders Nilsen did it again. Not only he managed to get some art to show from this incredible bunch of talented artists that will be part of the PFC#4 thing, but he found out crazy ways to share it with people. Jugglers will happen at Co-Exhibitions, and the reception (with probably all authors and people involved in PFC#4 and Autoptic !) is tuesday, August 13th, from 7pm to midnight, as there will also be music for your ears, thanks to Zak Sally‘s Pretty Ladies latest awesome project.

Minneapolis, we are already totally in love with you.

French publisher ION on its way to Minneapolis !

People who check what PFC4 is all about already found out it should be a huge task to follow everything that will happen in Minneapolis these weeks. You already saw that at the end of the residency-laboratory week, there’s this Autoptic monster event. But before this, Minneapolis people will have a chance to see some great exhibition at the Minneapolis offices of the French Alliance, just next door to Autoptic’s spot : Benoit Preteseille’s ION exhibition. 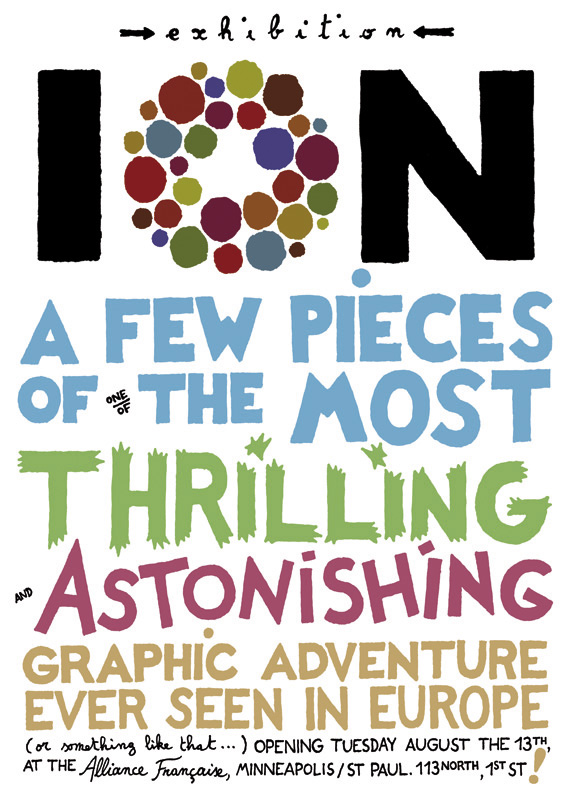 ION is a publishing structure that was founded in 2010 in Angoulême, France, which is run by Benoît Preteseille, cartoonist and auteur de bandes dessinées on his side.
With his ION inprint, he’s publishing books that center the notion of drawing, through a range of small pamphlets that evolves between artist’s books and collections of illustrations.
There’s plenty of treasures to discover here, unclassifiable works, comic-book artists, cartoonists, tatoo artists, photographers, that, aside their daily and usual main works, grow their own inconspicuous drawing practice, sometimes off the record, sometimes experimental. That’s precisely here that ION is digging, thirteen books are available already.

This exhibition is brought to you courtesy of The Alliance Francaise de Minneapolis / St Paul, Association ChiFouMi, Magelis and Région Poitou-Charentes.

Here’s a few examples of the nice things Benoit is publishing, and that are parts of the exhibition : 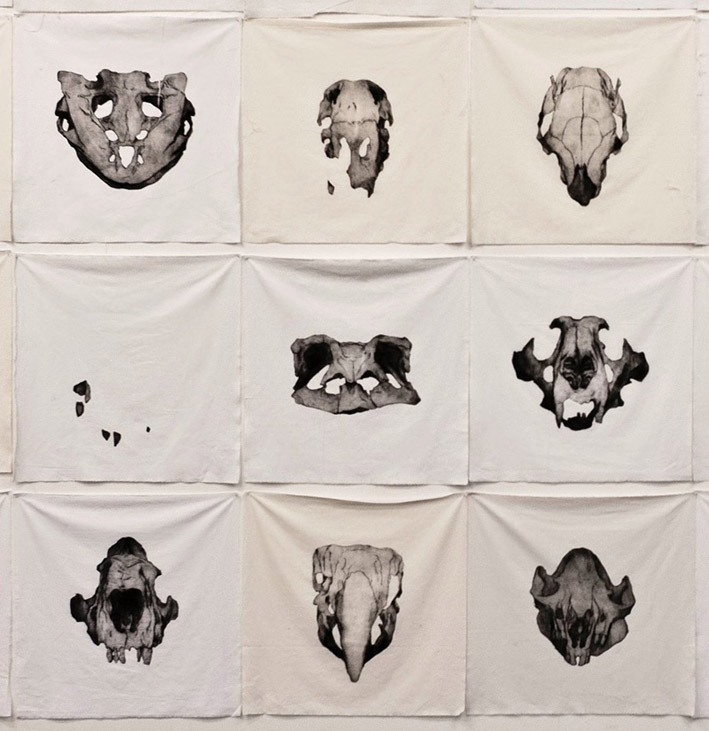 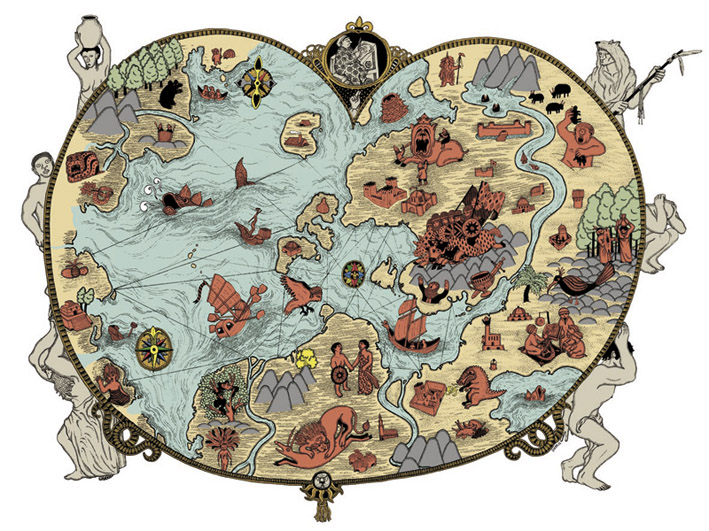 Minneapolis friends ! Don’t miss the Meet & Greet introduction/meeting at the Alliance Française (113 N 1st St, Minneapolis), on tuesday, august 13th, 5 pm. Benoit will be here for introducing this exhibition, but averybody of the infamous PFC4 adventure should be here too, and will be pleased to see you there !

Minneapolis welcomes the first NORTH AMERICAN EDITION of Pierre Feuille Ciseaux or: PFC 4 August 11-17, 2013 hosted at the Minneapolis College of Art and Design. 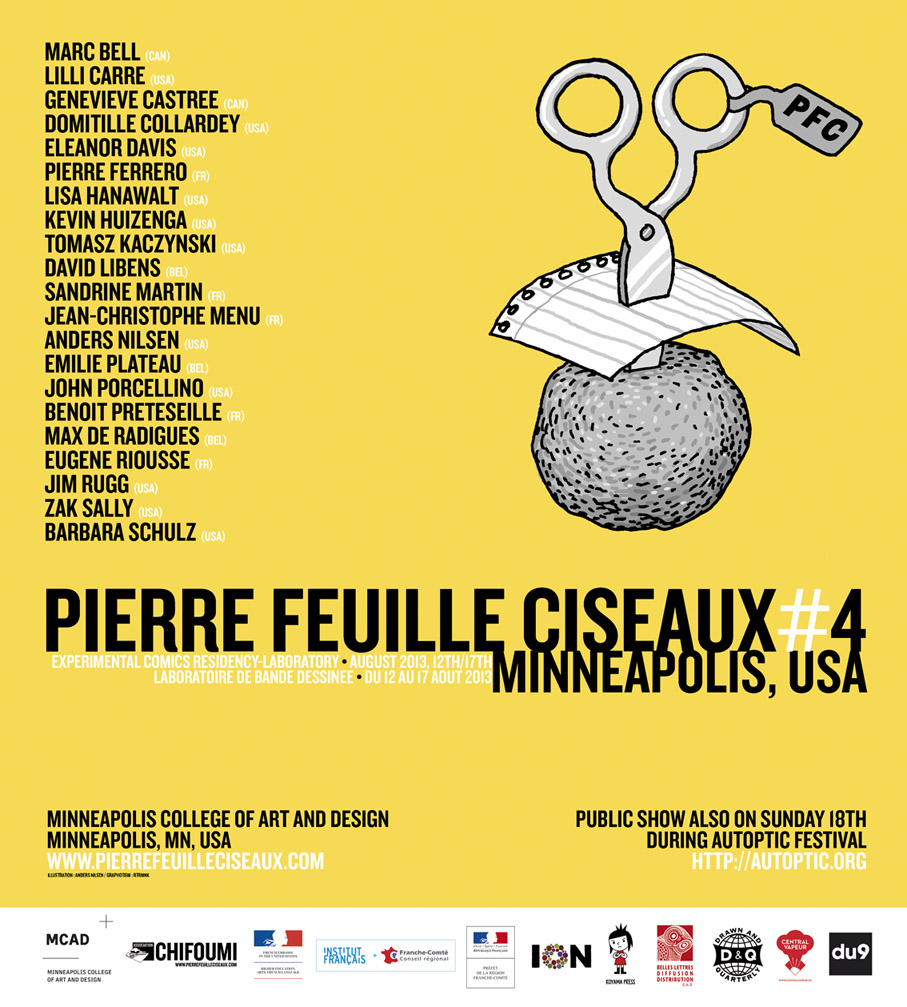 PFC (“Pierre Feuille Ciseaux”, or “Rock Paper Scissors” in French) is an experimental comics laboratory held on the grounds of a 17th century salt factory (Saline Royale, Arc et Senans) in rural France. Beginning with its first incarnation in 2009, PFC has brought an international group of cartoonists, illustrators, printmakers and artists together for one week, with no distractions. The artists live, eat, sleep and work together with one sole focus: to create new work in a collaborative setting.
The primary purpose of the residency is to explore and invent new ideas about the Comic Art form (“Bande Dessinée” in French) through collaboration (often across language barriers) and experimentation (using the French experimental tradition of “OuBaPo” restrictions as a catalyst). On the final day, the results of the week’s collective work are displayed in a gallery setting, and the public is invited to interact with the artists in the form of workshops and public talks.

For this, the first North American edition of the PFC, its originators, June Misserey and members of Association ChiFouMi, will be coming to the U.S. to co-lead PFC 4 with Barbara Schulz, head of the Comic Art Department at the Minneapolis College of Art and Design, Zak Sally (cartoonist and US liaison to the PFC), and cartoonist Anders Nilsen. Featuring a group of ten North American comics authors as well as 6 artists from France and Belgium, the week-long comics laboratory will be held in association with and hosted by MCAD, where the artists will live and work for the duration of the residency.
An exhibition of the week’s work will be presented to the public on August 17th, in MCAD‘s Concourse Gallery.

PFC 4 overlaps and interacts with some various events :
– from monday, 12th and for two weeks long, some students will follow the special class bring around the PFC concept ; this session is oversee by Barbara Schulz and June Misserey. More informations about this very class on the dedicated website : mcad-rockpaperscissors.tumblr.com.
– a major retrospective of the work of Jaime Hernandez, renowned creator of “Love and Rockets” in MCAD‘s main gallery (with the artist in attendance for the closing event, Friday August 16),
– Minneapolis’ first “festival of independent culture”, AUTOPTIC, on Sunday August 18th.

While so many authors are being labelled as “cartoonists”, it would be quite narrow-minded not to look beyond this supposedly less formalized area and think about artists who could contribute to the peculiar object that PFC is – in order to find something in return.

We discovered Jessica Seamans’ work almost randomly on the Internet and immediately figured how talented and solid she was as an illustrator. “Like many others,” one might – at first – be tempted to say. Then a few months later, we had a stroke of luck: At the time of our stay in Minneapolis (in 2013 for the 4th edition of Pierre Feuille Ciseaux), we met Jessica very briefly during the 1st Autoptic Festival (a convention that focuses on a specific alternative comics scene in the US). Jessica Seamans is also one of the co-founders (notably with the precious Dan Black) of Landland : A tiny but awesome silkscreening studio located in the Midwest since late 2007. Their collaborations and their creative as well as technical exchanges, in the immense variety of prints shown there (gig posters, thematic posters, film posters, record covers, etc.), were particularly impressive in the narrative power of the author’s creations.

Jessica Seamans presents herself as an illustrator and a screen printing artist. She produced very, very little material that could be described as straightforward comics, to say the least. But those who follow her work are already well aware of the significant extent of her extremely narrative drawings, whose conception divides them into several types of infra-sequences that reflect each other. Her style tells as much as it illustrates, the lines she draws seem to belong to the same long history whose fragments she partially reveals. Her books carry within them as many complementary elements to each other, just as a sentence is composed of words. It makes you wonder what a comic strip by Jessica Seamans might look like.